We’ve all been there: the moment where the house grows dark, and you’re forced to go on the hunt for that elusive circuit breaker to get things back up and running again. It’s a rite of passage for practically every homeowner! But have you ever wondered exactly how a circuit breaker works, and what specifically causes it to activate? 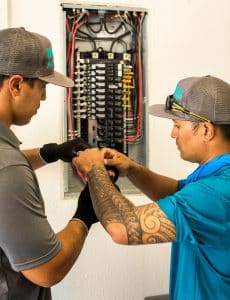 A circuit breaker is designed specifically to protect against any possible current and circuit issues within your electrical system that could damage the integrity of your home or workspace. Despite some differences in overall structure and design, nearly every circuit breaker is made to interrupt the current flow of electricity after a fault event, or an abnormal electrical current, is detected. Unlike a fuse that must be replaced after a fault is triggered, circuit breakers can be reset after an event to resume normal operations, making them an indispensable part of any dwelling’s electricity safety system. Once a faulting event has been detected, the breaker interrupts the power delivery system to prevent the initial fault from developing into a major malfunction throughout the circuit. Most breaker systems designed for the home are of the low voltage variety, and can be reset manually by returning the switch to its nominal position.

For the most part, a breaker ‘flips’ when said electrical faults has been detected in the system. Common kinds of faults include:

If you find your circuit breaker has flipped, be sure to carefully investigate the probable causes. Perhaps you’ve been overloading a circuit by running too many high-powered appliances all at once, or have taxed an outlet past its capabilities by plugging multiple gadgets in all at once. However, if breaker-flipping begins to become a regular occurrence, or if you cannot locate the source of the circuit breaker engaging, then you’d best leave it to the professionals at WikiWiki Solar and Electric: we’re standing by, ready to receive your call 24/7 to ensure the safety of your home and your ‘Ohana. We’re licensed and bonded for all of your electrical needs, and will always be there when you need us.