Aloha! Today WikiWiki Solar and Energy would like to share a bit about LED (light-emitting diode) technology, and how it can benefit your home or business by making your space more energy-efficient and require less maintenance to boot. E hele kāua!

Tell me about these da kine LED things, how does it work? 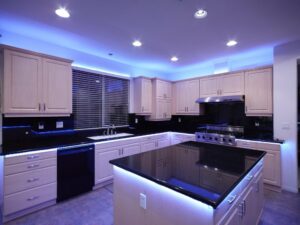 LED-based technology remains one of the fastest-developing energy innovations in the world, paving the way for a new energy efficiency for all your lighting needs. LED lighting differs from traditional, incandescent bulbs by way of how they are able to provide illumination. Incandescent bulbs possess a thin, metal filament that heats up as electricity passes through. When enough heat has been generated the meta filament glows in order to produce light. LED light bulbs, on the other hand, pass an electrical current through a semiconducting diode, which is encased in a microchip. This process casts light when electricity is applied to illuminate the LEDs housed within the microchip. The technology itself does not rely on heat to produce its light and holds a much greater energy-efficiency than traditional, incandescent bulbs. For example, a typical incandescent bulb might use somewhere in the neighborhood of 60 watts of electricity to light up a room, whereas an LED bulb will produce the exact same amount of luminescence for only around 10 watts of electricity.

Additionally, LED-based technology is not limited to utilizing replacement bulbs for incandescent ones. Many home-based fixtures, such as ceiling fans, are now equipped with LED-integrated technologies as well. Some Smart-based LED bulbs can even connect to your local Wi-Fi network to allow for remote control of your lights! Talk about living in the hale of tomorrow.

Should I consider making the switch?

We certainly think so! It can help you save a ton of money on your monthly electric bills, in addition to supporting the renewal of our ‘aina. Did you know that many current LEDs bulbs have a lifespan of over 10 years? That’s over 25 times longer than traditional lighting/incandescent bulbs, adding up to big savings alone. This is made possible with LED-based technology because there is no filament to burn out or require replacement, as is the case with all incandescent-based lighting. As an additional benefit LEDs also emit no heat or UV rays, whereas incandescent bulbs can release over 90% of their generated energy as heat. Such heat emission can create potential damage to nearby furniture or fabrics, in addition to making incandescent bulbs sometimes difficult to handle due to their heightened temperature. On average, residential LED lighting use at least 75% less energy than incandescent lighting sources, and lasts up to 25 times longer, often going over 10 years without requiring replacement!

There are many different kinds of LED lighting and varied applications to harness their potential, not only for residential homes but also for many industrial and commercial settings as well. Lighting costs can account anywhere from 20% to 50% of a company’s overall energy costs, which makes switching to LED-based technologies one of the easiest and most-effective improvements that a business can implement.  Many municipalities across the world are making the switch to LED-based technologies due to their highly efficient application to many different settings, including outdoor area lighting, streetlights, and task/project-specific usage.

Want to learn more about how to make your home positively radiate with LED-based technology, sparking in energy efficiency? Give us a call today, we’d be proud to take a look at your current energy bill and tell you more about the long-term savings that can be yours by making the switch to cleaner, more-sustainable energy sources. Mahalo nui!