You’ve heard a lot about them, probably seen them on the streets, and spotted those brand new charging stations popping up around Maui and Moloka’i…but are you truly in the know about electric-powered cars and what exactly they do? Electric Vehicles (EVs) are vehicles that utilize one or more electric motors for their movement, utilizing stored energy from a rechargeable battery component. Amazingly, the first electric vehicles actually date back to the late 1800s! Slowly but surely, design elements and battery capacity expanded through to the present day, largely propelled by the dual goals of decreasing greenhouse gas emissions and to utilize the rapid advancements of battery capacity. 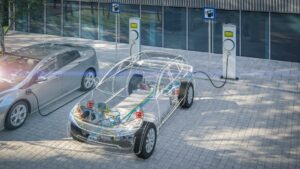 In comparison to a typical, internal combustion engine vehicle, electric cars on the whole:

That’s a lot of bang for your buck, and for the environment too! There are far too many benefits to be had by switching to electric-powered vehicles to list in one humble blog post, but let’s briefly touch one quite a Big 3: money, efficiency, and saving the environment!

As of this year, the total cost of ownership for electric cars in the United States is less than for an equivalent internal combustible engine-based vehicle. Although the margins can differ depending on the type of car being discussed and the region in which they are purchased, the expected savings on an EV are more than capable of making up for their initially higher purchase price over the lifespan of the vehicle.

Furthermore, according to the US Department of Energy’s Office of Energy Efficiency and Renewable Energy, “EVs convert about 59%–62% of the electrical energy from the grid to power at the wheels. Conventional gasoline vehicles only convert about 17%–21% of the energy stored in gasoline to power at the wheels.” That’s a massive increase in overall efficiency and work capacity!

Finally, electric cars are absent the myriad pollutants emitted from combustion-based engines, including hydrocarbons, carbon monoxide, lead, nitrogen oxides, volatile organic compounds, et. al. Improving our overall air quality is an important goal for all of us to collectively work towards, and electric cars help us to make our homes and communities a greener, cleaner place to live, saving an average of 1.5 million grams of CO2 emissions annually!

You might be asking yourself: are there any major disadvantages for owning an EV? Ultimately, a majority of the tradeoffs involved the shorter range of electric vehicles, as current batteries allow for between 60-100 miles on a full charge. Additionally, there are not as many model options to choose from with EVs, and charging stations can occasionally be a challenge to locate. With the rapid proliferation of electric-based technologies, however, these may in fact not remain as disadvantages for much longer .

Unfortunately, the state of Hawaii has concluded its incentive program to purchase an electric car as of this past summer, but there are still a number of federal tax rebates that can be explored when purchasing your vehicle. For our island residents hoping to malama aina, electric cars can be a wonderful way to leap into the future while also helping to preserve the lands, the air, and the oceans from the harms of fossil fuel-based pollutants. Aloha!