Batteries have been a vital part of the energy equation for decades, powering everything from the timepiece on your wrist to the most critical elements of the electrical grid across the globe. While recent technological advances have helped to modernize much of our current infrastructure and energy needs, batteries have struggled to keep the pace and remain primed for major advancement in the coming years. Today, we’d like to take a brief tour around the exciting future of battery storage to help you imagine the possibilities for a cleaner, greener future in energy production and storage. 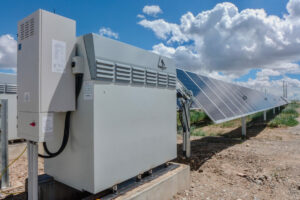 First, a brief primer on the electric battery itself: batteries are a power source comprised of one or more cells which have a positive electrode (the cathode) and a negative electrode (the anode), along with an electrolyte which chemically reacts between the two. This reaction then creates a flow of electrons within the established circuit, generating electricity for whatever purpose it was designed for.

When you think about batteries, you might be conjuring an image of the disposable ‘AAA’ batteries that are always falling out of your remote, or perhaps the Lithium-Ion batteries powering the smartphone that displays our blog. Indeed, disposable batteries (which are also known as primary batteries) can have a potentially disastrous effect on our environment due to their inability to be recharged or otherwise repurposed, creating a major potential headache for conservationists and energy brokers alike. Conversely, secondary batteries, or rechargeable batteries, have continued to gain traction due to their increasing adaptations into everything from electric vehicles to the power grid itself. But what’s on the horizon to help bring the battery into the 21st Century?

Vanadium flow batteries, or V-flow batteries, are able to be both reusable and more sustainable than their ion-based counterparts, discharging 100% of their stored energy and holding up for over 20 years on average without appreciably degrading. Furthermore, the Earth’s crust contains much more harvestable vanadium than it does lithium, helping to support the ‘aina by shifting towards a much more readily-available resource. V-flow batteries are likely ticketed towards larger-scale applications overall, as their overall size and impact would not be able to fit into the modern electric car.

Solid state batteries are also gathering quite a bit of steam as of late, with some estimates predicting that they will cost from $400 to $800 per kWh by 2026. Solid state batteries utilize non-flammable electrolytes in their design, which allow them to charge faster and at a greater range than most of their commercially-available counterparts. Their unique design allows for them to be both safer and to be potentially utilized by an overall greater range of applications, exciting experts who are working towards their implementation by the wider public over the coming years.

The ongoing development of better, more-sustainable battery technology remains a vital part of our energy future, both here in Hawaii and across the world. Carbon-based emissions continue to threaten the natural beauty and vitality of our planet, and advances in battery-based technology comprise an important part of the global plan towards creating a more-sustainable energy plan in the years to come.