Aloha! As always, it’s an extremely exciting time in the world of renewable energy: recently, Ford officially announced the F-150 Lightning, one of the world’s first commercially available, electric-based pickup trucks on the market. The Lightning will sport a range of up to three hundred miles per charge, along with 10,000 pounds of total towing capacity. With up to 563 horsepower and 775 pound-feet of torque, the newest electric vehicle (EV) packs a definite punch that rivals the capacity of the traditional F-150. 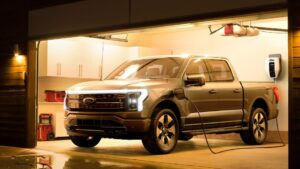 What might be even more impressive is that the F-150 can do things that no gas-powered vehicle could ever dream of: featuring bidirectional charging capability, the Lightning will be able to fully charge a home with its battery capacity for up to three days! The possibilities for adaptation in the home and on the worksite are endless: imagine saying goodbye to all the problems presented by a power outage by simply plugging into your truck!

As if that all wasn’t enough, Ford also announced that the truck will start at around $40,000 when it ships in the spring of 2022. Once we account for all of the potential tax credits that can be applied, the new F-150 will likely be cheaper than many of its gas-based counterparts, not to mention every bit as powerful and rugged as the original.

Speaking of performance, let’s take a look at the numbers: currently, the mileage of a gas-powered truck is approximately 18 miles per gallon, whereas an EV provides around 3 miles per kilowatt hour (kWh). Based on 230 miles driven per week, this would equal out to:

When you consider that the average cost to charge up the new Ford EV via a typical home PV solar system is approximately $5.40 per week, that’s a winning equation! By way of comparison, when gas prices regularly average over $3.80 per gallon in Hawaii, you would be paying around $48.50 per week to keep a comparable, gas-based pickup truck running.

It’s truly mind-boggling to consider all of the potential savings when combining the awesome power of solar energy with the energy efficiency of EVs – to say nothing of the malama for the environment! Continued dependence on fossil fuels has driven up the cost of energy for everyone, not to mention taken a severe toll on our planet at-large. Solar power and other renewable energy resources are helping to deliver a future that is both far kinder to the ‘aina and far more efficient than energy derived from dirty, fossil fuel-based technology.

Now’s the time for citizens across the Aloha State to help pave the way towards a more-sustainable energy future. WikiWiki would be honored to introduce you to all the benefits of renewable solar energy: drop us a line and find out just how much you could be saving!